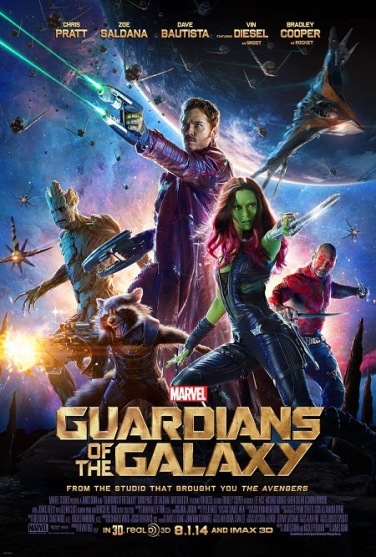 Marvel Studios, the producers of fan favorite films and mega blockbuster films such as: Iron Man, Thor, Captain America and the Avengers, presents a NEW and EXCITING franchise, which explores the darkest and deepest reaches of the galaxy.

Guardians of the Galaxy is an epic, action/adventure film which picks up where The Avengers left off and transports the audience farther into the ever expanding Marvel Universe.

The story unfolds with Peter Quill—a young, swashbuckling adventurer—who seeks to procure a bounty, which leads to others pursuing him in an effort to retrieve it. The bounty in question is a mysterious orb of great value and power, which is being sought after by a powerful villain named Ronan, with plans of galactic conquest. In an effort to keep the orb from Ronan and survive his fury, Quill aligns himself with a rag tag group of dissidents: Rocket—a vicious, cybernetically altered raccoon with a gun, Groot—a humanoid tree-like creature with a very limited vocabulary, Drax the Destroyer—a grief stricken, vengeance seeking warrior and Gamora—the alluring and mysterious fem fatale. When the quartet discover the inherent power of the orb and its destructive potential, they join together with a band of renegade pirates from Quill’s past, to stand against Ronan and his forces to save the galaxy.

Guardians of the Galaxy was a near perfect summer film. It had a solid story, good casting, good performances, action/adventure, excitement, drama, comedy, social commentary and plenty of heart.

While the characters aren’t nearly as recognizable as their mainstream counterparts, The Avengers, they don’t really need to be and I feel it’s for the better. A motley crew of reluctant protagonists form the core of Marvel’s “Guardians of the Galaxy” and the quintet consists of Star-Lord (played by Chris Pratt), Gamora (played by Zoe Saldana), Rocket (voiced by Bradley Cooper), Groot (voiced by Vin Diesel) and Drax the Destroyer (played by Dave Bautista).

The film was directed and co-written by James Gunn, who I must say did an excellent job of bringing together story, actor performances, tone and characterization. The elements of this film hit on all cylinders without hiccups. There’s never a dull moment with this film and even when the action has slowed down, the audience is exposed to a great deal of character introspection from the characters, delivered with just the right amount of emotion. The back stories are carefully woven into the tapestry of the film and evenly dispersed throughout.

Guardians of the Galaxy takes the audience back to the roots of Marvel’s developmental stories from the 70’s and 80’s, which led up to the powerful stories and events that are unfolding today. The film has a free-flowing, old school soul which harkens past films such as Star Wars and Raiders of the Lost Ark. That very sense of wonder and perilous adventure which epitomized those films are very much present in Guardians of the Galaxy…IN SPADES!

From a directorial perspective, Gunn encourages the audience to let go and not take things too seriously. The world created—while connected to the greater Marvel Universe seen in The Avengers and other films—is well imagined and developed within this glimpse that is given. Like Star Wars, the alien landscape portrayed is at once foreign and intimately familiar in its depiction. It’s that very familiarity which drives you to feel the characters, their plight and the societal structure of the film, beyond the comic book inspired, alien setting(s).

Actor performances in this film were astounding. Pratt appeared to be born for his role, Saldana has evolved into a bankable, female action star, while Cooper and Diesel’s animated characters steal the show!